The stats for osteoporosis are scary – worldwide 1 in 3 women over 50 will suffer an osteoporotic fracture (1 in 5 for men).  Over 60% of fractures occur in women, usually in the hip, ankle or wrist.

One of these stats was my mum. She was in a supermarket car park ready to do her weekly shop. She opened her door and as she went to get out of the car, her foot caught in her seat belt and she fell from the car seat onto the ground. Now, she has a Mini, so it wasn't far to fall (about a foot!) but it smashed her hip into lots of pieces.

After they had operated on her, that's when they told her she had osteoporosis. There were no symptoms that alerted her, it took a nasty hip fracture to find out.

And she's not alone. In Western hospitals, hip fractures occupy more beds than any other disease, with 20% dying as a result and 50% losing their ability to live independently.  Wow, that's a huge problem!

You can watch the video below or listen to the podcast 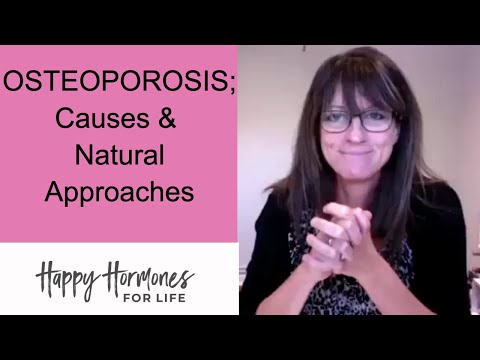 Osteoporosis literally means ‘porous bones'. Your bone is living tissue, an active endocrine organ. It's constantly being built and destroyed, and as we get older it’s this balance that if it’s upset, can cause more destruction than new build, leaving your bones weak and brittle, and easily broken.

Bone health is usually measured by bone mineral density or BMD, measured by a DEXA scan – which you can get on the NHS once you hit 65. But if you’re over 50 and are at increased risk of osteoporosis, I think you should be asking for one.  If you can't get one through your doctor, you can get them done privately.

Osteopenia is the first stage where BMD is lower than it should be but not low enough to be osteoporotic. Osteoporosis is where the BMD has decreased significantly and risk of fracture is high.

There are lots of ways to prevent bone loss and to support bone building, whether you are at risk or have already been diagnosed.

If you think you're at risk and you can't get a Dexa scan from your doctor, there's a great new test you can do at home. Osteolabs is one of the first tests in the world to offer fractional calcium isotope determination for the diagnosis of calcium mineral balance in the skeleton and generalised osteoporosis.

Get 20% off using this link; http://happyhormonesforlife.com/osteolabs

Or talk to us about a diet and supplement plan to support your bones – the good news is that bone can always be rebuilt if you give it the raw materials!